Long regarded as essential to preventing catastrophic and deadly fires, the awareness of the toxic nature of widely used flame retardants used in furniture foam and fabric is rapidly growing. The Wellspring Upholstery Cooperative offers a full range of safer and more environmentally-friendly alternative flame retardants. 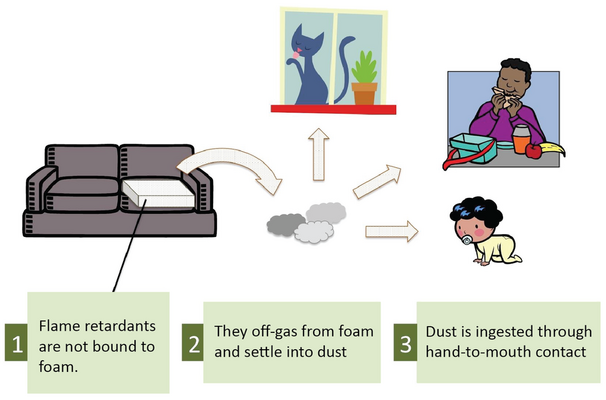 For years, various types of polybrominated diphenyl ethers (PBDE) have been added to foam and fabric as a flame retardant. However, several studies in recent years have shown that, in addition to its retardant properties being exaggerated, when ignited, PBDE give off higher levels of toxic gases, including carbon monoxide, than untreated furniture.

In addition, PBDE don’t chemically bind with polymers, and leach from the surface they’ve been added to. PBDE routinely spread into the broader environment via off-gassing and accumulate in household dust.

PBDE emissions have been linked to a variety of aliments, including diabetes, hormonal and immune system damage, and cancer.  As the award-winning Chicago Tribune series “Playing with Fire” detailed the toxins leach from the foam, too often saturating indoor environments.

Concern about PBDE has led 16 major American furniture manufacturers — including Ashley Furniture, the nation’s largest — to swear off using them. And several major companies such as Kaiser Permanente, Staples, Facebook and HDR Architecture — the second largest architectural firm in North America — say they will no longer buy PBDE-bearing furniture.

Twelve states and the District of Colombia currently have laws restricting the use of PBDEs in consumer products, including furniture.

The Wellspring Upholstery Cooperative is fully committed to offering the safest and most environmentally friendly flame retardants on the market today.

Alternative PBDE-free materials include natural, rubber-derived latex, wool batting, or polyester-fiberfill — all of which are less likely to be treated with flame retardants.

To learn more about PBDEs and alternatives to their use in upholstery and furniture, please visit any of the following sites: